Falcons women relentless with a tough road ahead 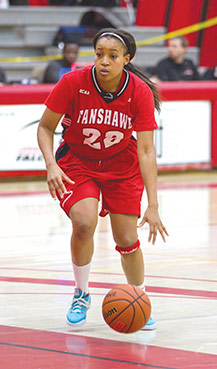 Larissa McBean will compete with Fanshawe at the OCAA provincial tournament.


As we near the end of the 2014- 15 Women’s Varsity Basketball season, guard/forward Stephanie Antwi and teammate Larissa Mc- Bean were able to talk about their experience this season both on and off the court.

These two players have helped the Falcons’ women to a third place position in their division with one game remaining this season.

Hailing from Etobicoke and London respectively, Antwi and Mc- Bean are in their final semesters of the Medical Office Administration program here at Fanshawe.

For Antwi, moving from her home in Toronto was no easy task.

“Originally I wasn’t going to come [to London], but then I thought about basketball and I [also] had a cousin who also played [at Fanshawe],” she said. “I knew if I was coming here than I wouldn’t be alone, and I was right. I have my cousin and I made friends with Larissa [McBean] and we’re [all] like family now.”

One might wonder if her parents influenced her to play basketball in any way, but Antwi insists that isn’t the case.

“My dad claims he played soccer and my mom claims she played netball, which is like basketball, but I don’t believe it,” she said with sarcasm.

While juggling playing basketball with a full time course load, both girls are preparing for an upcoming work term.

“We have a placement at the end of the semester, and I would like to see where that takes me,” said Antwi. “If I can get a job out of that it would be great, and if not, then I’ll have to look for a job [afterwards].”

“It’s different from my first year up until now, because in my first year, we had a bunch of set plays where coach said ‘do this or do that’ and we had to [play] that way,” she said. “Now we play a more read and react [style] that leaves us to use our IQ to become better players.”

“It’s a big difference, but it’s a good change.”

While the coaching style allows for an open playing style, the same holds true in the locker room where everyone’s personalities are able to shine through.

McBean echoed those statements by describing their team dynamic as one that features a collective approach to the game.

“I think we are fortunate to have a group where everybody on the team is strong, and there isn’t one scorer,” she said. “We are the type of team where if somebody leads by example, then everybody starts going, but if somebody is off it could trickle down the team, and we need somebody to step up.”

“It’s a curse and a blessing at the same time.”

The women’s basketball team will wrap up their regular season on the road against the St. Clair Saints on Sunday before preparing for the OCAA Provincial Tournament beginning on February 28.

“It’s going to be tough,” Antwi said. “We need our whole team to be in it together and fight as one and push for each other. Everybody needs a little fight for us to be able to win.”