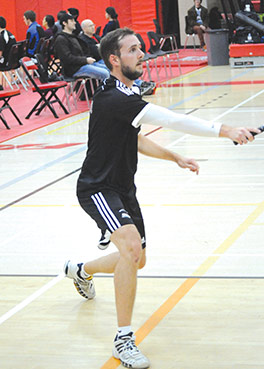 Alex Dominski is part of the mixed double that will be competing in the OCAA championship, which is taking place at Fanshawe.


Four Fanshawe Falcons badminton players qualified for the Ontario Colleges Athletic Association badminton championships, which will be held on February 20 and 21 at Fanshawe College.

“Strong results all year,” Falcons badminton coach Matt Plachta said about the women’s doubles team. “It looks like we’re going to be in contention for a medal [at the OCAA championships], if not a shot at nationals.”

Hogan and Grobbecker placed second behind Humber College at the OCAA Western Regionals, which was held on February 6 and 7 at Humber. The team played five games, winning four and losing one to Humber.

Plachta says the women’s doubles team was close to placing first at the Western Regionals, and that there’s only one strong team out east.

As for the mixed doubles team, it placed third behind Humber and Mohawk College at the Western Regionals. Frederick and Dominski won four games, but lost two.

“We’ve got two week to work things out, to push them through their paces, to get them ready, get them playing at a high level,” he said about the mixed doubles team. “I think they’re going to be competitive for a medal.”

The team has only played one tournament together, but Plachta says that both players have strong individual results.

“My goal is to be able to place at provincials and possibly make it to nationals,” Frederick said. “We have to push harder through our next few practices … and really just play our best at provincials.”

In order to make it to the Canadian Colleges Athletics Association championships, both teams will have to place either first or second in their division.