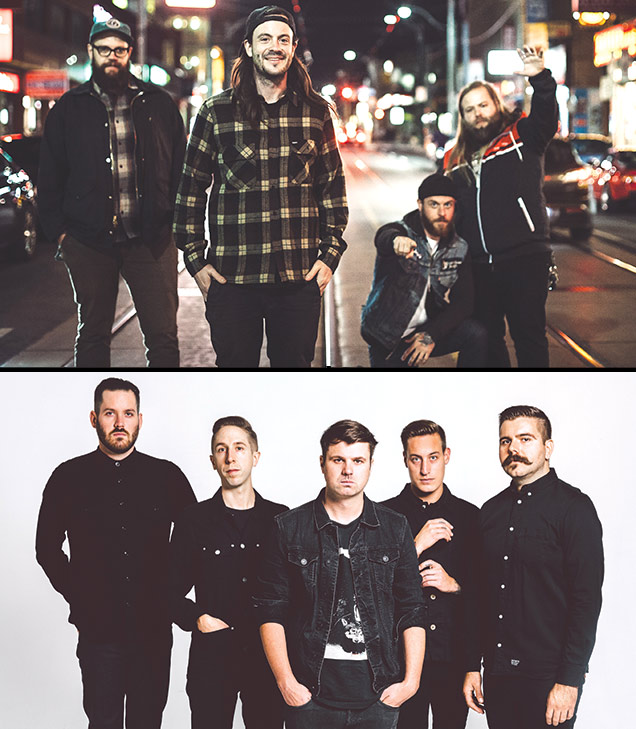 However, now with the show in the books, the entire music industry is united in looking forward instead of back. Musicians, media and fans alike tuck themselves in at night with warm thoughts of SXSW and whispers of the summer festivals to come.

But let’s not get ahead of ourselves since there are still a lot of hot ticket concerts to come before the snow melts. Normally this column highlights music and concert events here in the city, however, there are two good reasons to make the trip to Toronto before anyone’s flight to Austin leaves the ground.

Label mates Cancer Bats and Silverstein have a lot in common for bands approaching their own brand of punk from two different backgrounds. To begin, both groups released their most recent records early in 2012 – albums that were acclaimed for their ferocity and originality. Both bands are also counting down the days to their next release and both stand as testimony to the fact that music – and hardcore rock in particular – has a promising year ahead in 2015.

Both acts differ somewhat in the brand of hardcore music that they offer – fans of Silverstein’s melodic pop-punk direction might not automatically fall for Cancer Bats’ feral metal-punk, and vice versa.

There’s more than meets the eye to both acts, however, and their careful approach to building new albums to realize their respective visions puts them in a league above their contemporaries as artists of substance and style.

Recently, Silverstein has been on the road celebrating the 10th anniversary of its album Discovering The Waterfront with a tour that began at the London Music Hall. But the band’s Toronto performance at the end of the month is a must-see – the band that closes the tour at the Danforth Music Hall on February 28 is not the same one we once saw.

Silverstein’s new album, I Am Alive In Everything I Touch, will be widely available on May 19 on CD and two limited runs on vinyl, which was preceded by the single “A Midwestern State of Emergency.”

The album features a song cycle of four suites – “Borealis” (North), “Austeralis” (South), “Zephyrus” (West) and “Eurus” (East). Every track on the album is set against a different city geographically located in each of the four regions, with real-life recordings of each city woven into the music. In that way, I Am Alive In Everything I Touch paints an undercurrent of loneliness amidst the buzz of urban life.

“As much as I’ve put myself out there over all the records we’ve done, there’s something more real about this one,” front man Shane Told said. “At times I almost stopped myself and said, ‘Is this going too far? Am I going to say something I’m going to regret?’ And after taking a step back and a few breaks from writing, I decided I needed to do this.”

A sentiment seemingly echoed by Cancer Bats with its latest effort, Searching For Zero, which will be widely released on March 10 on CD and red translucent vinyl. The excitement for this album is palpable; the band has premiered three songs, including the crushing single “Arsenic In The Year Of The Snake” and videos for “Satellites” and “True Zero,” all explosive offerings from a powerful record to come.

“We were coming out of what was a really heavy year for all of us, with a lot of challenges, non–stop touring and the deaths of people really close to the band,” said front man Liam Cormier. “With all of these things we’ve had to deal with this past year, we were all at the point of saying no more bullshit.”

“We’ve found our absolute zero, where there can no longer be a negative, and from that point, everything moving forward can only be positive.”

The band celebrates the new album with a release show at the Phoenix in Toronto on March 12 with Indian Handcrafts, Dead Tired and Exalt (tickets available from ticketweb.ca), but if you can’t wait to see or hear more about the coming release, check out the “making of” series of videos the band has filmed to illustrate the story of Searching For Zero.

For more of the latest in music news, album previews and more, follow this column on Twitter @fsu_bobbyisms. I’m out of words.