Waste management: Back to basics 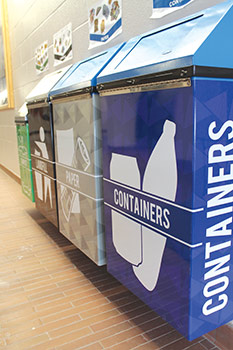 The new bins outside D1080 got a makeover - something sustainability hopes will help improve waste management.


After a waste audit for 2014 showed a decrease in recycling numbers, Fanshawe College’s sustainability co-ordinator, Mary-Lee Townsend, and her maternity leave replacement started to work on improving recycling at the college.

“[Amanda Richman], who replaced me [for mat leave], was working with a group to come up with a design for our bins,”

Townsend said. “We were working with the Graphic Design students.” Townsend says a student worked with sustainability on the design to make the bins clearer.

“We found that [the bins] might actually be hindering recycling rates,” she said. “We wanted to be able to highlight what bin was what.”

Better signage was always something the sustainability department wanted to move forward with.

“[Right now] people have to stand back and look down at the signs,” she said. “The new signage will be put up at eye level.”

There are now waste bins outside D-1018 that have the new design. It’s an obscure and rarely frequented hallway, but Townsend says it’s to help with decision-making.

“It is easy for all of us in Facilities to see it and make a decision,” she said. “We’re looking at it. We keep going to the bins, opening it up to see what’s inside – if it’s making a difference.”

“We also wanted to see visually if it’s something we like.”

The simple colouring of the bins may help make a positive difference in waste diversion.

“What are the first things you learn when you’re a kid? It’s colours,” Townsend said. “Using decals with the colours is going to make a difference. Simpler, colourful.”

Townsend says that if the bin overhaul takes flight, it could be a good thing for Fanshawe.

“To make the investment for a system like that in the college will say a lot about the college and its commitment to waste management and waste diversion,” she said. “It’s really going to be a showpiece for the college.”

A final item sustainability is hoping to steamroll is having an appropriate number of bins accounted for all around campus.

“Where there’s one bin, there should be three bins,” she said. “You should never see anywhere with just one bin. That is a new part of something we’re changing as well.”

Townsend encourages staff and students to get in touch with comments and suggestions.

“When you see what we’ve done, when you see any changes, if you’ve found that it’s made a difference I’d love to hear,” she said. “That might help me to push [everything] forward.”

You can reach Townsend at sustainability@fanshawec.ca.