Entry-level hatchbacks from Nissan and MINI 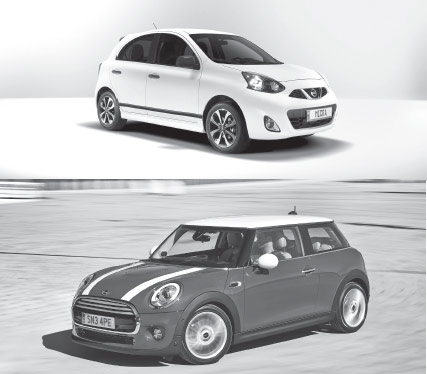 CREDIT: NISSAN, MINI
Two hatchbacks from two manufacturers. Which comes out on top?

I wanted to point out an important milestone for me. It was on this week back in 1997, when my first article was published in the Interrobang. I have written about all manner of cars and thoroughly enjoyed it. Here’s hoping for another 17 years.

Let’s look at two entry-level hatchbacks from two manufacturers that compete in a different price bracket.

Nissan made big waves regarding the Micra, when it was first launched earlier this year. It was (and still is) the cheapest new car you can buy in Canada, with a base price of just $9,998.

For that price, you get a 1.6-litre, four-cylinder motor that produces 109 hp and 107 lb-ft of torque. Power is fed to the front wheels via a five-speed manual gearbox, although for $3,000 more, you get air conditioning and a four-speed automatic gearbox.

The base model also does not get power windows or power locks, and you can forget about luxuries such as a reversing camera or Bluetooth. Those features are available on the Micra but at a higher price point. My Micra SR tester had all the goodies – except for an automatic transmission. It had a starting price of $15,748.

It is perfectly fine for most of the time. I love how maneuverable it is in the city, and it rides quite well for a car with a wheelbase of just 96.5 inches. The steering is also light and precise, which means zipping in and out of traffic and parallel parking is a breeze. It has decent space for four adults, and offers plenty of space under its rear hatch for your groceries.

I didn’t love manual transmission, which is a clunky device. Every time you change gears, it feels like you’re going to break the lever, and the pedal position is not well suited for heel and toe downshifts either.

Couple that with a heavy flywheel, and what you have here is a manual transmission vehicle that is not fun to drive. I have driven the automatic version, and I prefer that to the manual.

While the Micra is a good city car, it is not a good highway cruiser. You will get a lot of wind and road noise, along with engine noise.

The Micra is a fine vehicle and it would work really well for someone who does most of their driving in the city. The best thing about it is how cheap it is to run. I averaged 6.4 litres/100km during my week, which is the best non-hybrid economy number I have seen all year. So, if you’re looking for a used car, you should be tempted to look at a brand new 2015 Nissan Micra – a car with warranty might just be enough of a reason to buy new.

If you’re looking for a hatchback that also makes a premium style statement, a good answer is MINI Cooper. The hatchback offers lots of style and features, but now also offers something its older base model could never deliver on – decent grunt.

The old model had a normally aspirated 1.6-litre four-cylinder motor that had barely enough power to get out of its way. The 2015 Cooper gets a 1.5-litre, three-cylinder motor. So how is a smaller engine with one less cylinder an improvement? Because, this new engine gets a twin scroll turbo charger, it produces 134 hp and a useful 162 lb-ft of torque (that is quite a bit more power than what the old Cooper had).

Power is sent to the front-wheels via either a six-speed automatic or a six-speed manual transmission. My tester had the latter, and let me tell you, this transmission is a joy to use. The manual gearbox in the MINI could very possibly be the best in the market currently, as it is precise, well weighted and smooth.

When you are having fun, switch on the “Sport” mode in the Cooper, which sharpens up your throttle response and puts the turbo charger on high alert for swift action. According to MINI, the Cooper can sprint from zero to 100 km/h in just 7.9 seconds, and has a top speed of 210 km/h. So, the base MINI is now fast enough to please car enthusiasts.

When you want to calm down and just cruise, switch the car to its “Eco” mode for maximum fuel savings. In a week where I did a mixture of driving, I managed to average 6.9 litres/100km, which is very good. I bet that number would have been a lot better if I didn’t enjoy Sport mode as much as I did.

Apart from driving, the 2015 Cooper still offers lots of style, inside and out. On the subject of its interior, it has now grown in size a bit, which is welcomed by someone my size, and the seats are decently comfortable. While the interior looks good, I miss the big central speedometer that was such a hallmark feature of the previous generation Cooper.

Usually, new models are more expensive than the ones they replace, but that is not the case with the Cooper. The base price is now $20,990, which is a few thousand less than the model it replaces. That is not a lot of money for a car that offers this kind of style and performance.

So, if you’re looking for a premium hatchback, the new MINI Cooper comes highly recommended.

Dig up some buried treasure

Dig up some buried treasure