Lightning Watch: Lightning and Express in a heated match 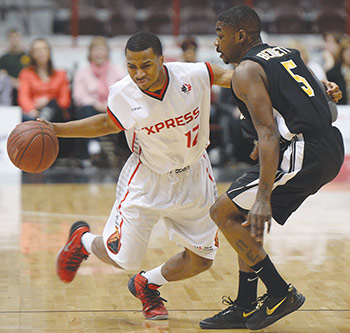 CREDIT: NBL CANADA
Windsor guards like Darren Duncan will cause issues for the Lightning next round.

The 401 Rivalry is alive and well in the National Basketball League of Canada.

The London Lightning and Windsor Express will play in the Central Division Conference Final.

It has been one of the league's best rivalries due to Windsor's continued success against a historically strong London Lightning squad. Heading into the series, Windsor and London split the 16 games 8-8 over the past two seasons. Something has to give in this seven-game series.

Windsor finished the season with the best overall record (29- 11) in the league due to a good variety of skills at both ends of the court.

Windsor has one of the most dominant inside offenses in the league. Led by bigs DeAndre Thomas and Chris Commons, Windsor has been pushing offences to the perimeter all year. London will use Jermaine Johnson and Dwight McCombs to try and counter that threat. The good news for London is that Windsor has only faced Johnson and McCombs twice — in a home-and-home series in February. Johnson had 22 points in that first game versus the Express (and his first for London) and led London to 50 points in the paint. The Lightning will need a performance like this to neutralize their bigs.

However, Windsor could very easily switch all of the shooting to the guards. Darren Duncan and Stefan Bonneau are the league's best pairing in the backcourt. One thing they do really well is defence. They are first in the league at field goal defence and second in the league in three-point defence. Essentially, these guys tend to shut down teams from three-point ground. Depth guys like Papa Oppong bring lots of size (6 ft., 4 in.) to the guard position in Windsor, which is something London doesn't have a lot of. Guards like Darin Mency and James Millen don't usually see significant minutes, but that could change this series.

Windsor also has some speed in the backcourt. Arguably Windsor's Bonneau and London's Stephen McDowell are the two fastest players in the NBLC. It just so happens that the Lightning's Stephen is out for the season. They are going to find it very difficult to match Bonneau's speed and offensive ability (he averages 22 ppg, good enough for second in the league) as well as Darren Duncan's passing ability (first in the league with nine assists per game).

When it comes to London, they have lots of time to get a run going. Coming into the series, they only had one day off after their final game with the Brampton A's. London hasn't had a chance to gel. That could all change in this series.

Marty Thompson is the play-by-play voice of the London Lightning for their livestream, SportsLive24.net.

Motoring: Truckin' around in the terrific Toyota Tundra