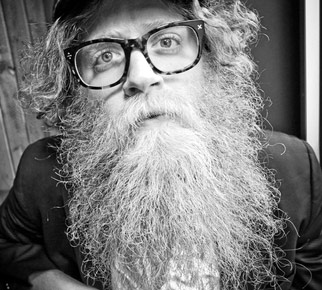 “I was just some guy in the North End (Halifax) with a guitar and the audience response was great but it wasn't a big deal but in Europe but it was like ‘Oh, this international artist all the way from Canada. Can't miss it,' said Caplan over the phone from Toronto. Caplan was attending the International Folk Alliance conference as one of the showcase artists.

“So they're ready to be impressed, but in Halifax for a long time I had to like tell people to shut up and listen and now I have kind of a really strong relationship so it's starting to link up which is really cool.”

Caplan has been a touring musician since 2006. He was born in Ontario, but Caplan now calls Halifax home having lived most of his adult life in the city.

His stage presence and roaring voice command attention. His theatre background keeps him performing even between songs. When he's not singing gypsy-folk and playing his banjo or guitar, he's making the audience laugh.

Caplan is on tour with his first album In the Time of the Great Remembering, released in 2011. The tour will take him through Ontario, Quebec and the Maritimes before heading to Austin for the South by Southwest (SXSW) festival in the spring. He'll also be hitting stages in Australia and Europe before returning to Canada.

It's hard to imagine Caplan having much time left for writing new material, but he's constantly trying to make it work.

“You really have to carve it out. Today, for example ... I woke up, I had a meeting at noon that went until 2 p.m. and now I'm doing this interview in a taxi on my way to a hotel to (go to) another meeting (and) a show at 3.”

Caplan said he's in the writing stage of his next album and plans to be in the studio in May.

“My next record should come across more ... Polished? I hate that word. But much better sense of what I want to accomplish in the studio.”

The upside of being busy is crossing things off what Caplan calls his “musical bucket list.” He's recently made an appearance on cultural affairs show, CBC's Q Radio with Jian Ghomeshi.

He performed two songs in the Q studio off his first album, “Stranger” and “Down to the River.”

He said he's been able to cross more off his list faster than he thought he could, but he's not near the end yet.

“I'd love to do some tours in Asia and I'm going to Australia soon which is cool. A couple others are I really want to do (CBC Radio's) Vinyl Cafe and the rest is stuff like working with different producers and artists who can bring experience with different instruments. So I'm just developing the resources to be able to do that.”

Caplan's music isn't the only thing getting attention. His unique sense of style, including a lengthy unkempt beard and curly hair are also getting people talking.

“I didn't sit down one day and say ‘I want to start a music career and stand out.' I just happened to have a beard and I'm kind of just rolling with it. I think that has more to do with the kind of aesthetic I'm interested in. I'm not the kind of guy to shave every day and wear designer clothes,” said Caplan.