The history of the Leafs-Wings rivalry 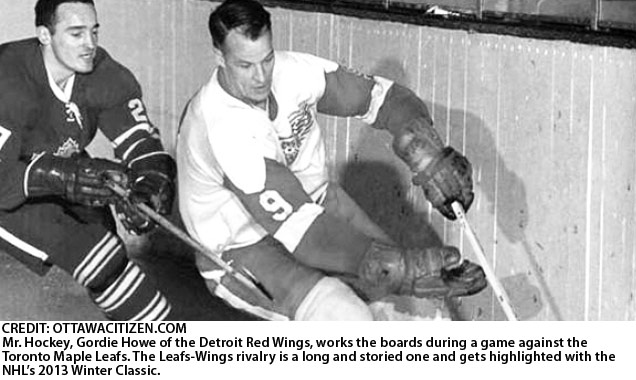 The game will also include a fan event and an alumni game between former greats from both the Leafs and Wings. Although in recent years, with changes to the NHL schedule and the realignment of the Leafs to the Eastern Conference in the late '90s, the rivalry between Toronto and Detroit has waned. Being that they are two Original Six teams, however, they have a rivalry that spans decades between two cities that are merely 240 miles apart and share a fan base from the same general region. Perhaps this rivalry will be renewed after the Winter Classic if Detroit is moved to the Eastern Conference, where they logically should be playing.

Here are some highlights from the history of the Toronto-Detroit rivalry:

- Detroit and Toronto have met 23 times in the playoffs, although they haven't met once since the '90s when Toronto was moved to the Eastern Conference.

- The first time they met in the playoffs was in 1929, when the Leafs played the Detroit Cougars, the predecessor to the Red Wings. It was a two-game series that Toronto won on most goals, 7-2.

- The last time the two teams met in the playoffs was in '93. Toronto won 4-3, winning game seven by a score of 4-3. Toronto would go on to lose to Wayne Gretzky and the L.A. Kings in the Conference finals.

- Seven of these 23 playoff matches were in the Stanley Cup finals.

- In the 1950 playoffs, Gordie Howe missed a check on Toronto's Teeder Kennedy and suffered severe injuries, requiring surgery. Kennedy was accused of deliberately trying to injure Howe, leading to a violent series between the two teams. Detroit won the series, 4-3.

- Now, in the post-lockout NHL, the two teams rarely meet. There have even been recent seasons where Toronto and Detroit have not played each other once in the regular season, with the only outlet for one of the league's most historic rivalries being inconsequential preseason games.

Fun and Fitness: Get heart smart