Call me old-fashioned but...Choose your words wisely they may just be your last

About a month or so ago, I met who I thought was a really great guy. Now, just so you don't get the wrong impression, let me make clear from the get-go that our relationship was entirely one of a professional nature. While I think it was likely apparent to both of us that we shared a sense of attraction towards each other, the circumstances prevented the situation from heading in the romantic direction. Although like I said, I thought fairly highly of the boy, I had come to terms with this, and was quite content with simply having him in my life as a friendly acquaintance… that was until he dropped the love bomb as part of his signature in one of his correspondences to me.

While I'm not now so ridiculously out of touch with reality to believe that he was actually professing his innermost desires via this slight interjection, I must admit it “weirded” me out! Being that I've been in significant relationships before, it's not as though this was my first exposure to said term. However, I am a firm believer that the word love, because of the connotations with which it is associated, should be used highly selectively; moreover, only when in fact you a) mean it and b) are prepared to deal with the consequences of uttering it.

The problems between us started when I attempted to point this out to him in what I thought was a clever, humourous and non-threatening manner. I never heard back. To “save face,” I wrote him again apologizing for my “overreaction,” but I maintained I was not comfortable with his usage of that term in my general direction. Though he likely didn't view the situation as one that was worthy of eliciting a panic attack, and despite our return back to the seemingly normal conversations we conducted prior, I couldn't shake it — I was still really bothered by the fact that he signed his letters to me in this way, and it certainly didn't help that he kept up this behaviour, even after I pointed out to him how awkward it made me feel. 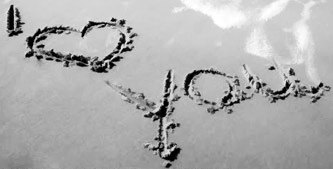 Because he and I both work within the entertainment biz, I could completely understand if he used this sort of tactic to reel in fans, but from a professional standpoint, I not only felt that it was highly inappropriate, and extremely peculiar; but as well, judging by my own reaction, this could quite possibly get him into a precarious predicament.

The easy justification would be to sum up his misuse of this term to either cultural or gender differences, but again, even taking these factors into consideration, his actions still prove bizarre. Case and point: We are both of a very similar ethnic background, and I can't picture myself ever using the “L” word so candidly towards someone with whom I wasn't really all that well-acquainted. In regards to the latter excuse, after imparting this story to my male friends, and asking them how they'd feel about the situation had it happened to them, and the roles were reversed, they likewise informed me that they would view it as strange.

So, what does all this have to do with being old-fashioned? Well, strict rules of conversational etiquette and decorum largely became pervasive during the Victorian Age. Advanced into contemporary society by both “Mommy Knows Best” sayings, as well as by the work of language philosophers such as Paul Grice, I think the above-documented story is good enough proof as any to indicate that clearly these rules require revisiting.

According to Grice's Conversational Maxims, the reason for my offense, confusion, and curiosity regarding the use of the “L” word in the aforementioned situation is because my acquaintance broke the “maxim of manner” which explicitly states that in order to ensure agreeable, steady, and neutral discussion, “one should not use words he/she knows his/her listener(s) won't understand and/or say things he/she knows could be taken in multiple ways.” More simply put, the moral of this week's story is this: don't employ words that are laden with significance unless you truly mean them, and further, if words can be misinterpreted, they will be.

Seeing as we are now in the age of “txting” and Facebook where friendships are increasingly forged and maintained via electronic means through which the addition of emotion to one's words is not possible, the potential for miscommunication is greater than ever before. Therefore, a return to “proper” and considerate dialogue is an absolute must. Above all, “know your audience.” While we're on the subject of conversational etiquette, I'd also like to point out that a clever rabbit once advised his deer friend quite well when he uttered that, “If you don't have anything nice to say, you shouldn't say anything at all.”

Though hippies made a habit of using terms like peace and love rather freely, in the eyes of some these words have lost their affective imputations, and therefore can rightly be designated as having a place in everyday casual discourse. I think it's pretty safe to say that this view is not only inaccurate, but as well leads to problematic.

Unfortunately, in my final attempt to resolve things with my acquaintance, I somehow managed to only make the situation that much worse. When I merely raised the query as to why he felt it was appropriate to use said term with me, he immediately got defensive, and it seemed that everything and anything I said beyond that point would only be taken as a personal attack. Ah, and you thought intimate relationships were hard! Guess that will teach you all never to sign a letter to me with “love” and if you do, you better wash out your mouth, shortly thereafter, with soap!
Editorial opinions or comments expressed in this online edition of Interrobang newspaper reflect the views of the writer and are not those of the Interrobang or the Fanshawe Student Union. The Interrobang is published weekly by the Fanshawe Student Union at 1001 Fanshawe College Blvd., P.O. Box 7005, London, Ontario, N5Y 5R6 and distributed through the Fanshawe College community. Letters to the editor are welcome. All letters are subject to editing and should be emailed. All letters must be accompanied by contact information. Letters can also be submitted online by clicking here.

Take the power back: Protesting the torch