UFC heats up the box office


In what didn't really come as a surprise to anyone remotely following the UFC, or sports in general, tickets to the first match in Canada were selling fast and furiously on their first weekend.

The match, which is scheduled to be held on April 19 in Canada's Mixed Martial Arts (MMA) hotbed, Montreal, will feature a fight between hometown Georges St. Pierre and welterweight champion, Matt Serra.

MMA is a hybrid sport that mixes boxing, wrestling and other martial arts into one exceptionally violent, and entertaining, sport. So violent is MMA that it is currently only sanctioned in 32-American states, and north of the border only Alberta and Quebec frequently host events. 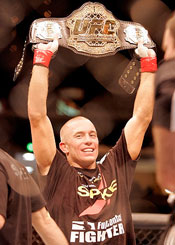 However the sport has taken off in Canada in the past year, mainly with the emergence of St. Pierre, who's not only one of the best in the sport, but has managed to become Canada's MMA poster-boy with a mix of skill, approachability and a sense of humour and media-savvy that has made him one of the sports biggest marketable assets.

And market the sport he has done. The UFC reportedly made more than $200 million in pay-per-view revenue last year alone, which exceeds that made by WWE who announced a third-quarter total revenue of $108.1 million in September 2007.

The Montreal event, which will be held at the Bell Centre sold over 13,000 tickets in a 24-hour period, while prices ranged from $50 through $550. The event, which is expected to be a sell-out, will in all likelihood break the current UFC attendance record of just over 19,000.