D Courtyard in the midst of much needed makeover


The D-Courtyard has already been closed for several months, but for a lot of students it means nothing more than the loss of a springtime hangout. However a partnership between Fanshawe's horticultural program and the school's facilities planning and development department means that once it re-opens, the area will be much more than just a courtyard.

“They needed to make the space better,” said Michael Pascoe, the horticultural technician program coordinator. “The space was very dated and old, and wasn't very utilized. And for a core area of the campus it was really just unsightly.” 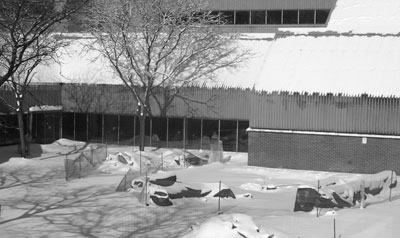 The plans for the courtyard currently include trellis's, plenty of seating, a permanent bicycle rack and separate smoking areas. But more interestingly a new lighting and PA system are being installed to allow the college to host after-hours gatherings including speakers, events and concerts.

Once the contractors themselves have completed the rebuild of the area and installed brick stonework in the garden, it then becomes the turn of the horticultural students themselves to turn the area into an inviting green space.

“They've revamped the paving and such to make it more user friendly, and my students are going to be doing the planting,” explained Pascoe. “Putting in new trees and shrubs and such in the area. The horticultural students and the horticultural program essentially do all the maintenance and planting on the campus.

“So instead of tendering out the landscaping portions, now my students do it. So the college saves money, we get to grow our plant collections and my students get real experience.”

The college expects the courtyard to re-open in late Fall 2008.