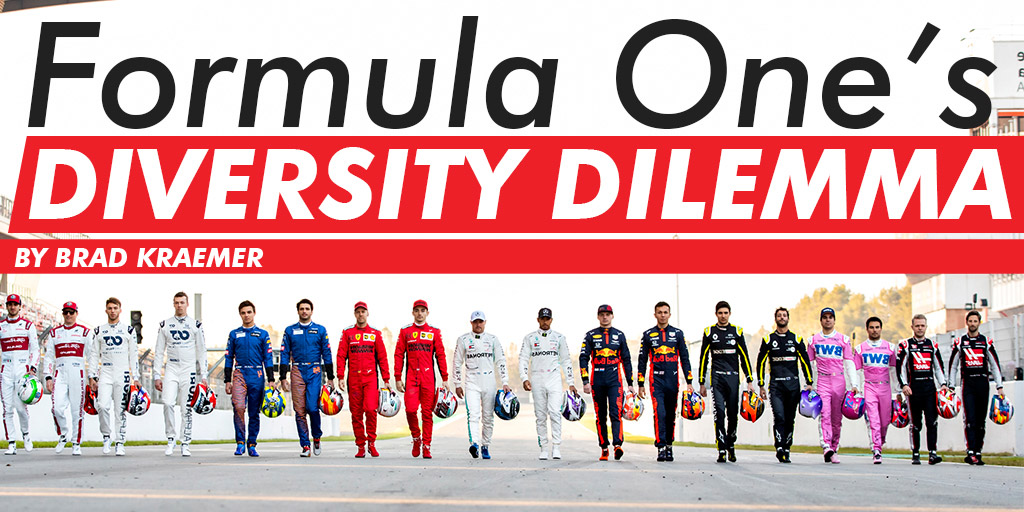 In over 70 years of existence, there has been only one Black driver and five women who have competed in Formula One (F1). Diversity and F1 on paper sound like they should go hand in hand. There are typically 20 Formula One drivers all from a variety of different countries. In 2021, nationalities ranged from Canadian and Mexican to Dutch to Russian, all the way to Japanese and Australian. However, the deeper you dig into the sport, the more you realize the self-proclaimed “global sport” is very exclusive. That may seem obvious, with only about 20 people or so competing every year, but there are many similarities within most of the competitors: white, male and - most importantly - wealthy.

Since the 1980s, a typical beginning of a career in F1 started in go-karts. Some started as soon as they were old enough and others started in their teens, but they all raced karts at some point. The karting scene is similar to F1 in the sense that just because someone is a good driver, does not necessarily mean that they win races. Money is everything. At minimum, to be competitive, parents need to fork over five figures every year. The richest families will spend over $150,000 in one season for their child to race. Good luck trying to beat them with subpar equipment. In some extreme cases, if luck is on your side, there are F1 driver development programs that will support a young teenager’s career like Aston Martin’s Sebastian Vettel, when he was backed by Red Bull at age 11, although, that doesn’t mean a free ride. A lot of the drivers who get accepted into these programs are from rich families and make money for the program through their parents’ deep pockets or sponsors.

The next step is to advance from karting into formula racing. Most will race in Formula Four, with the supreme F4 championships being in Europe. As expected, the money ramps up even more in F4. Parents typically spend $100,000- $400,000 just to race and that doesn’t even include travel and accommodation. Considering the best series are in Europe, anyone who lives elsewhere must move to Europe at some point if they want to progress. Even more money would need to be spent to send a child to race there. This doesn’t even include the fact that all that cash could be spent just to wind up on a bad team with a bad car and fail to compete anyway.

The formula racing world is a cutthroat one and if you want to make it, you need to stand out. If the talent is clearly there, a young motorist would likely move on to Formula Three. Following the theme of money, you’ll need about $600,000 to stick around. Although if a young driver continues to shine, they will get exposure. Also, if you win the F3 championship, you’re not allowed to return, so that is usually a oneway ticket to Formula Two. F2 can cost millions of dollars per season. At this point, free rides can happen, because if they’ve made it this far, their skill might be worth it. Be that as it may, the teammate of a free ride driver will likely be the son of a billionaire, because the F2 team needs the money from somewhere. To get out of F2, all drivers besides the exceptionally talented like Max Verstappen for example, have either bought their way into F1, or won the championship (but even Verstappen’s father was a former F1 driver and name recognition helps you get a seat in F1). A good amount of the drivers that do get their chance in F1, lose it in three years or less, due to a lack of money or a lack of perceived talent. Some drivers on the grid like Williams’ Nicholas Latifi are paying over $30,000,000 for their seat in F1 every year. His fortune comes from his father Michael Latifi, owner of Sofina Foods, who also now sponsors the Williams team.

Money might be the biggest issue, but race and gender are big ones as well. The only Black driver to compete in an F1 race happens to be one of the greatest of all time: Lewis Hamilton. He has recognized the sports lack of diversity and has started The Hamilton Commission, which mostly focuses on improving Black representation in motorsport from the UK. Hamilton was one of those special cases, growing up with his dad working multiple jobs to fund his karting. He knows better than anyone the financial burden the sport can cause. Vettel has also done incredible things off the track like this past F1 season, when he organized a women’s only kart race in Saudi Arabia, a nation with questionable human rights and gender equality issues. Jamie Chadwick is a 23 year-old woman from Britain and is currently a development driver for the Williams team and has had a very successful junior career. She could be the first woman to race in F1 since 1992. The sport seems to be recognizing its issue, but it’s far from being solved. Motorsport will always be expensive, but something must be done to give more chances to less fortunate kids.
Diversity Formula 1

Don't be Latin, mixed-race, or Middle Eastern: Exploring the lack of diversity in Canadian newsrooms

"One size doesn't fit all," says Western prof on the lifting of COVID mandates