Fanshawe cross-country is golden at provincials 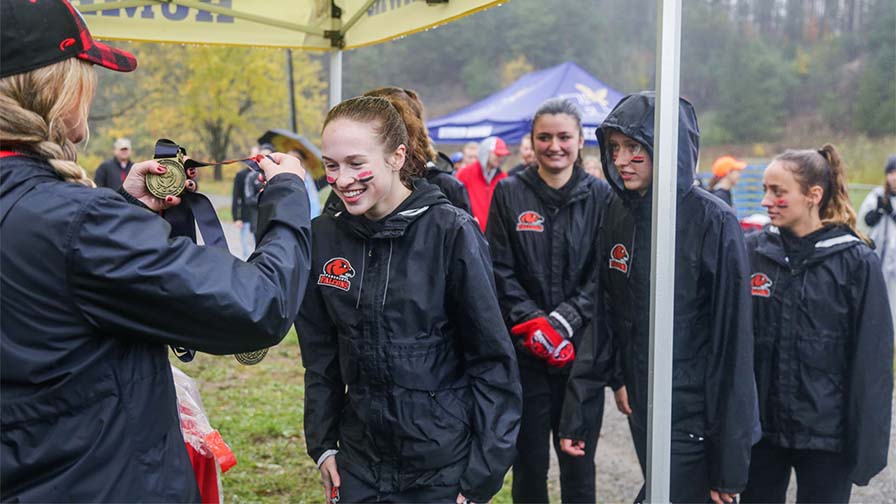 On Oct. 30, the men’s and women’s cross-country teams travelled to Humber College’s Albion Hills to run for OCAA glory and came out as the most decorated school. The men, led by first place finisher Seth Marcaccio and bronze medalist Sandy Freeland, beat St. Clair by a measly four points. The first seven runners to cross the line were all representing the Falcons or the Saints and even Fanshawe’s non-scorers (top four score for the team) had incredible times good enough for ninth and 11th.

As for the women, Tamara DePauw’s time of 26:27 stood as the best within the team and fourth overall, with Katie Rice 10 seconds behind in fifth place. Samantha Reidy and Julia Latham rounded out the top four scorers for Fanshawe, however they were the only squad to post times all under 29 minutes. Brooke Jez, who finished fifth for the Falcons despite tripping during the race and running on injured legs, shared how proud she was that both the men and women won gold.

“I’m super proud of everyone, like everyone had a really good race,” said Jez. “I struggled that race a little bit, wasn’t my best race but we work as a team. So when others aren’t doing their best, others pick up the slack I guess but you know, it was super cool to be part of such an accomplishment.”

The success of both teams comes down to the dedication and mental toughness of the athletes, but a good coach can help push them to the next level. Ashley VanderVecht was recognized as the OCAA Coach of the Year, and Jez credited VanderVecht for persuading her to do what she loves: running.

“I wouldn’t have ran if it wasn’t for Ashley,” said Jez. “I tried to quit and for someone who wasn’t going to run and seeing what I’ve accomplished now, without her, I would have never been able to do that. Now I get to go and travel and compete and I’ve made a lot of really good friends through Ashley encouraging me to run and do something I love. Running was my life and I had to give it up because of an injury. She’s an amazing coach.”

The teams will travel together to Calgary for the CCAA National Championships on Nov. 13, where the Falcon men will try to repeat as cross-country champions after winning in 2019 (no season in 2020), while the women will look to recapture the gold medal they won in 2018. Lastly, Jez explained why Fanshawe will win both team events.

“We put in the work and the effort behind the scenes and [we] want it. The girls are hungry too, but those boys are crazy for that win. Like I have never seen a group of boys so hyped all the time. They go to practice and they’re chanting like it’s provincials, even though it’s just like, a Saturday practice in Fanshawe bush. It’s crazy. I think the girls need to learn some tactics from the boys’ energy. I think the girls are going to win gold, but I think we need the hunger that the boys have. They’re great encouragement.”

UPDATE: In the printed version of this article as well as a previous web version, Interrobang incorrectly stated that the athlete pictured was Brooke Jez. The photo caption has since been corrected.
CCAA Cross Country Fanshawe Falcons OCAA

Fanshawe hires first ever director of equity, diversity and inclusion