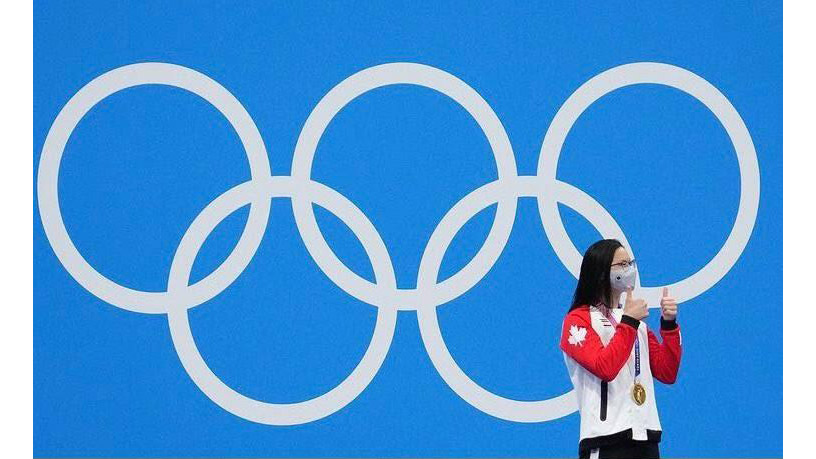 On July 25 at the 2020 Tokyo Olympic Games, Margaret (Maggie) Mac Neil of London, Ont. secured Canada’s first gold medal, winning the 100m butterfly swim. The 21-year-old fell in seventh place moments before setting a Canadian record, finishing at 55.59 seconds. Many different areas of the city flared up with pride and excitement as Mac Neil claimed the top spot. London Aquatic Club (LAC) and many of her clubmates gathered in Woodstock to cheer her on during her swim. The LAC also tweeted moments after her win, telling her to acknowledge her major accomplishment.

Believe it Maggie! Why not you? Right Mark?! https://t.co/vzO6UW0Aup

Mac Neil is also a former student of Sir Frederick Banting Secondary School, where her former educators frequently share their support for the talented swimmer.

“We’re always excited and proud to see Maggie perform so well at the Olympics, along with all of the [Thames Valley District School Board],” said Sir Frederick Banting Secondary School Vice-Principal, Christine Holmes. “We’re always cheering for Maggie and her teammates, what an accomplishment!”  Prior to the Tokyo Games, Mac Neil was awarded her first gold medal along with two bronze medals at the 2019 World Aquatic Championships. At that event, she had been competing against a leading Olympic champion and nationwide record holder for the event, Sweden’s Sarah Sjöström. The odds were against Mac Neil due to Sjöström’s winning reputation, but her triumph at this event helped raise her status for the 2020 Olympic Games.

Moreover,  Mac Neil has spoken at length about her race strategy being the foundation behind her successes. She feels the utmost comfort with her back-end speed which she gradually accelerates seconds following her front-end speed.

The resiliency of the Olympian was apparent when she experienced a few losses due to the COVID-19 pandemic just months prior to the Olympics. Mac Neil engaged in programs and with several coaches at the University of Michigan. The location was ideal due to its historic reputation amongst former Olympians. Mac Neil was then transferred to a high-performance training facility in Toronto. Leaving the United States along with being in quarantine for 14 days-weeks prior to the Olympics-was highly unfavorable. Still, the hard work paid off and Mac Neil was able to walk away with the gold medal...although she didn’t know it right away. One of Mac Neil’s well-known idiosyncrasies is her confused reaction prior to discovering her win. She’s mentioned previously that she doesn’t wear contact lenses during her swims and relies on her hearing rather than viewing the scoreboard. Many noted her surprise upon realizing she had won gold following her historic race Sunday.

Furthermore, the Olympian revealed on numerous occasions how her achievements are always surprising. Her hard work ethic and passion for swimming are the key drivers for her winnings. As of Tuesday, Canada has won a total of eight medals at the 2020 Tokyo Olympic Games. Notably, Kylie Masse of nearby LaSalle, Ont. won a silver medal in the 100m backstroke. Masse noted Mac Neil as being her inspiration.
Athletics London News Olympics Swimming

Fanshawe students use Matterport to view inside the Holy Roller