CREDIT: FANSHAWE ATHLETICS
Fanshawe Falcons' men's (left) and women's (right) volleyball teams both won their matches against the Niagara Knights on Feb. 1. The games were the Falcons' last home games of the season.

The Falcons women’s volleyball team (14-1) won 3-0 over the Niagara Knights (8-6). After the Falcons traded points during most of the first set, first-year Lauren Vahrmeyer (business) led Fanshawe with nine points. A block from Katie Stewart (fitness and health promotion) and a kill from Vahrmeyer closed the set 25-22.

A massive kill from Janelle Albert (business-marketing) continued the lead for the Falcons in the second set. The home crowd got excited after a block from Mattea Deleary (bachelor of early childhood leadership). A dig from Maya Danis (fashion marketing and management) earned the Falcons more points. Fanshawe won the second set 25-13.

The Falcons men’s volleyball team (7-8) won 3-1 over the Niagara Knights (8-5). Fanshawe led the first set 12-6 with points from rookies Ewan Mason (recreation and leisure services) and Daniel Ridings (construction engineering technology). While the Knights were catching up and chipping away at the Falcons’ lead, a kill from fifth-year Mike Liscumb (general arts and science) brought the Falcons to a 25-22 first set win. 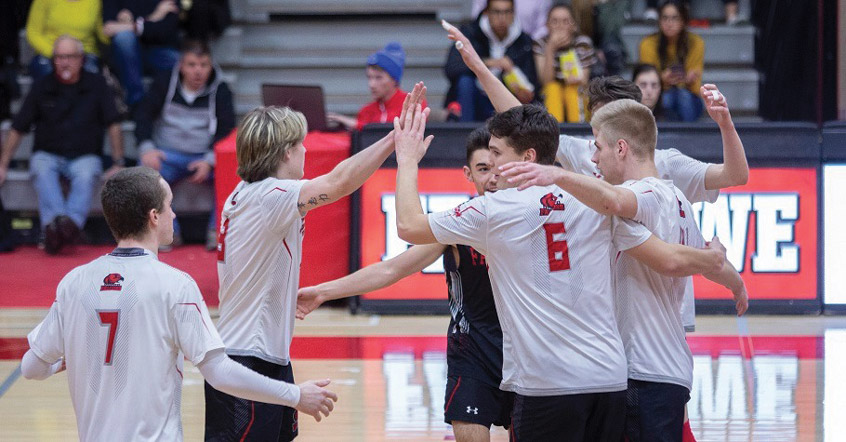 Luke Blissett’s (bachelor of commerce) back-to-back side kills gave the Falcons a slight edge in the second set. Mason’s service ace also continued Fanshawe’s lead and a huge kill from Mitch McFadden (electrical techniques) got the crowd on their feet. However, the Knights defeated the Falcons 26-24 in set two.

The Falcons and the Knights traded points in set three, with McFadden’s serving leading the Falcons. Elliott Leslie (business-marketing) set up Ridings for a kill. The Falcons’ well-balanced offence led them to snatch a 25-22 win in set three.

Liscumb’s kill, Ridings’ service ace, and Blissett’s block kept an 18- 12 lead going for the Falcons in set four. Mason’s consecutive right side hits led to a 25-17 win in the final set and the Falcons won the match. Four Falcons scored points in the double-digits with Mason at 17 points, McFadden and Ridings tied at 15 points, and Blissett earning 12.

The Falcons’ volleyball teams next take on the Cambrian Golden Shield on Feb. 8 and then the Boréal Vipères on Feb. 9.
Fanshawe Falcons OCAA Volleyball

From pink to lavender: A decade of ONERUN