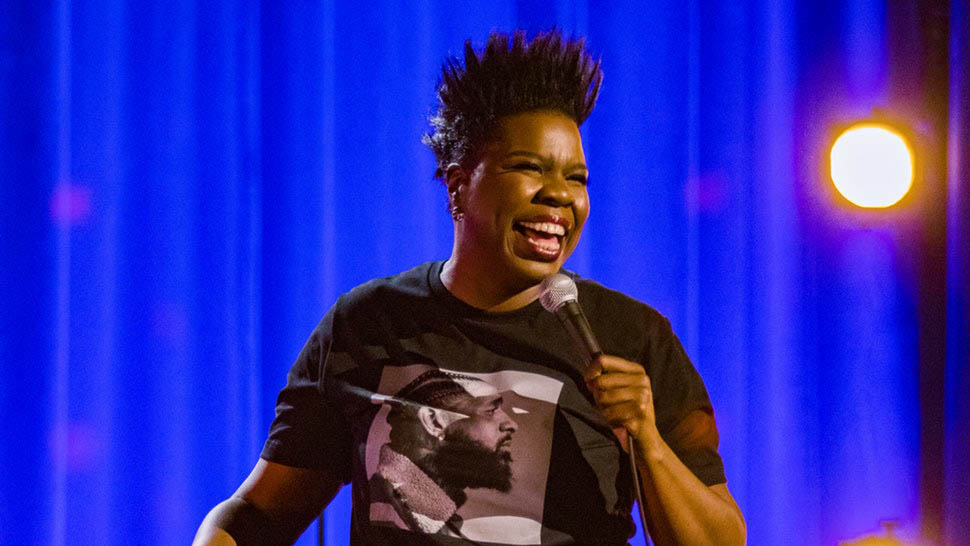 To be honest, the knee brace got me intrigued enough to watch this show. Personally, I’ve loved Leslie Jones ever since I saw her live tweeting on the Olympics and of course her reaction videos to Game of Thrones. I enjoyed that more than I enjoyed the last season of Game of Thrones itself.

Wearing a Nipsey Hussle shirt and a knee brace “on the outside,” Jones gives us an hour of insight in Time Machine, her first special since 2010’s Problem Child. It’s directed by none other than Game of Thrones showrunners D.B. Weiss and David Benioff themselves, so it’s safe to say they’re fans too. For those who do not know who she is, you might remember her from Saturday Night Live or the most recent Ghostbusters movie.

Jones’ new special is all about time — what it gives and what it takes away. It’s also about telling men to wash their… nether regions. Read between the lines. Jones’ tenure on Saturday Night Live made her what she calls “white people famous.” It’s easy to see why.

It only takes a few moments to recognize her masterful command over the audience. The best comedians keep their audience in the palm of their hands, and Jones is such a pro at telling stories that leave the crowd hanging on every word — you’ll know what we mean once you watch it. Watching Jones toy with the audience is a blast, and nothing beats seeing her unleash her comedic wrath upon a couple 20-year-olds.

According to Jones, we spend our ‘20s feeling fresh, our ‘30s decaying like an overripe banana, and our ‘40s in a state of absolute and utter denial. It’s not until 50 that Jones accepted her stage in life moved into a comfort zone where she could not care any less.

Cue the knee brace. She also goes on to recount how she tried to get Prince’s attention at a night club back in the day. Oh, and at this point you can expect a lot of dancing.

My verdict? It’s a must watch. Jones’ positive attitude and energy has a way to get to you even through a screen. Her realest moments focus on how the younger generation (she’s talking about us) has forgotten to ‘have fun’ and is riddled with anxiety and pressures of life.

After describing her ‘20s, ‘30s, ‘40s and her presently single situation, Jones closes with a bit that inspired the title of her Netflix hour. “I wish I had a time machine, like you know, to go back and tell the 20-year-old self, ‘Hey, it’s gonna be OK.’”

And you know what, it is going to be OK. Remind yourself that every day.
Comedy Netflix

1
How Superstore is my favourite modern "office" show
2
Top LGBTQ2S+ shows on Netflix right now
3
Pandemic leisure: How students are filling their free time now vs. two years ago
4
Reality TV bites, but it feels so good
5
Serial killers and entertainment: One in the same?

Triggers in the news: Surviving the Weinstein trials