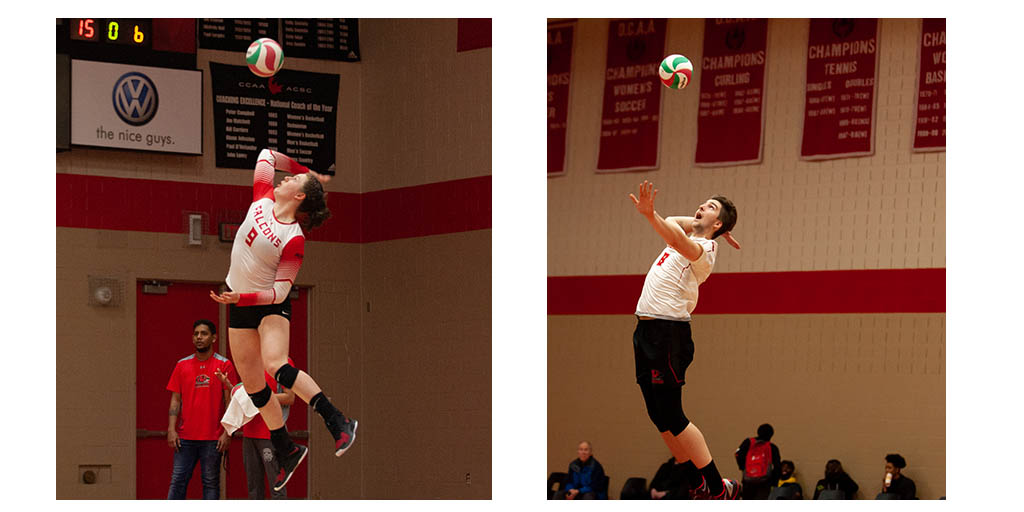 CREDIT: MATT HISCOX
Fanshawe Falcon Janelle Albert's (left) game-high 20 points brought the women's volleyball team to a 3=0 win during their three-set game with the Cambrian Golden Shield. Fanshawe Falcon James Pratt (right), who earned 11 points during the third and final set, gave the men's volleyball team an advantage so the Falcons could clinch a 3-0 win over the Cambrian Golden Shield.

The Fanshawe Falcons women’s and men’s volleyball teams are starting their season with a few wins.

Fanshawe Athletics announced the Falcons’ women’s volleyball team earned their third victory in a row after defeating the Cambrian Golden Shield 3-0 on Oct. 27.

A strong hit from third-year middle blocker Kim Hardy got the Falcons some points on the scoreboard during the third set. Cambrian held a 7-3 lead early on in the third set, but then Albert brought Fanshawe back into the lead with a block and two kills. Kiana Lee (fitness and health promotion) used her service ace to bring the Falcons to a 16-15 advantage. The Falcons won their third set with a 25-18 win. Albert’s game-high 20 points led the Falcons to a three set sweep.

The Oct. 27 win comes after a 3-0 victory over the Conestoga Condors on Oct. 19 and a 3-0 win over the Boréal Vipéres during their Oct. 26 home opener.

The Fanshawe men’s volleyball team also earned their second win of the season. Fanshawe Athletics announced the Falcons won their match with the Cambrian Golden Shield on Oct. 27 after winning three sets to none.

Kaleb Cole (electrical engineering) scored three points for Fanshawe in the first set. James Pratt (interactive media development) excited the crowd in the Glenn Johnston Athletic Centre with a major kill and brought an 8-2 lead for the Falcons. Hits from Daniel Ridings (construction engineering technology) continued to challenge the Golden Shield defence and the Falcons won set one 25-9.

Cole and Pratt scored 16 and 11 points respectively for the Falcons in set three, where Ridings also delivered a pair of kills to bring his personal game total to 11 points. The final set saw a 25-6 victory for the Falcons.

This is the second win for the Falcons’ men’s volleyball team, who also won their Oct. 26 home opener with the Boréal Vipéres 3-0. The double wins are a comeback for the Falcons after dropping their first game of the season with the Conestoga Condors 3-1 on Oct. 19.

“I’m proud of what the boys have accomplished thus far,” Patrick Johnston, head coach for men’s volleyball, said in an electronic interview with Interrobang. “I think any time you have 11 new athletes to the team, there is plenty of learning to be done but they’re coming along really nicely. I think we can definitely make a big push this season.”

Women’s volleyball head coach Jeff Millar was unable to comment before this article was published, but Interrobang wishes the best for the team for the rest of the season.

Both volleyball teams will host the St. Clair Saints on Nov. 6. Keep up with all the latest Fanshawe Falcons news by visiting fanshawefalcons. ca.

This article was written before both teams travelled to Ancaster, Ont. for their matches facing the Redeemer Royals on Oct. 30.
Athletics Fanshawe Falcons OCAA Volleyball