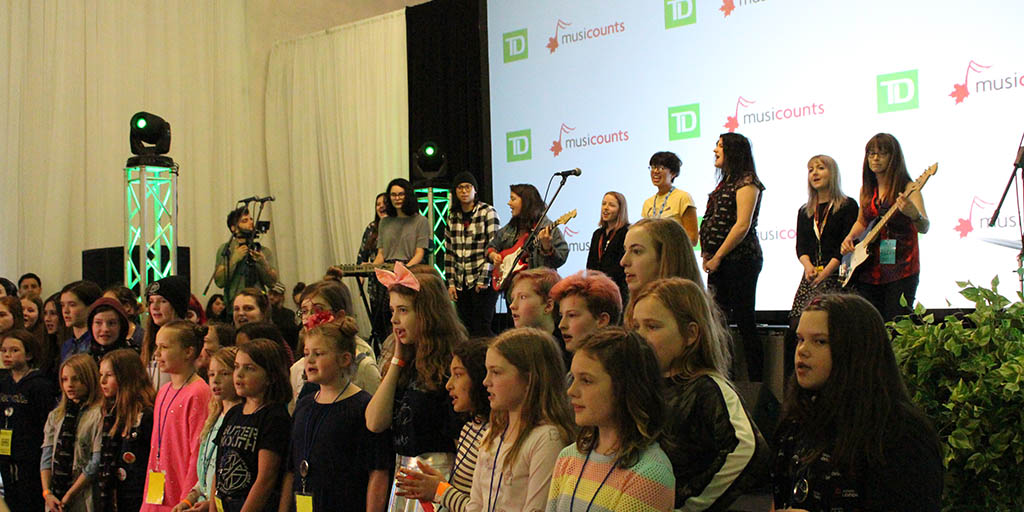 Amid the glitz and glamour of Juno week, a group of young girls reminded members of the Canadian music industry that every big star needs to start somewhere.

After a week of bonding and jamming, London Girls Rock Camp capped off its annual March break program with a performance in the TD Green Room at the Double Tree Hilton on March 15, celebrating a $25,000 instrument grant given through the Junos charity, MusiCounts TD Community Music Program.

“It still feels surreal to me,” Savanah Sewell, the camp’s program manager, said of the grant. “Everything, up until this week, it’s been a beg, borrow and steal kind of operation for us. Now, we have our own amazing library of amazing brand new gear. Most musicians don’t get to play on fancy new gear, so the fact that these kids are going to get to play brand new gear is pretty special.”

Founded in 2015, London Girls Rock Camp takes in girls for a week who don’t necessarily have any musical experience and teaches them how to play the rock band instrument of their choice. By the end of the week, the girls perform their own original sets.

The camp is typically run out of Fanshawe’s Centre for Digital and Performance Arts, although this year it took place at the TAP centre for creativity.

Because the camp has always provided equipment to the girls, Sewell said that the grant is a complete game-changer. With a new PA system and instruments, there is now potential for them to throw their own future shows and expand the camp’s presence.

Sewell said that beyond teaching music, the grant allows the camp to continue its mission of empowering young girls.

“We all know that there’s a bit of a gender equality issue in the industry, and the workforce in general,” Sewell said. “Let’s be honest it’s not just music, it’s happening everywhere….the goal is so that women don’t feel intimidated... This is where we start, we start with kids.”

The March 15 performance showcased the campers’ talents as singers, drummers, guitar players, bassists and songwriters. Several of the girls also took to the stage solo, impressing a room full of media personnel and industry pros.

Juno-nominated brother-sister country duo, The Reklaws then treated the girls to a surprise show, adding what Sewell said was a memorable component to an already exciting week.

“It definitely is really special for the kids to get to interact with people in the industry,” she said of The Reklaws’ appearance.

She said the next step is to now to foster the bands created through London Girls Rock Camp and help them throw all ages shows for each other, encouraging them to work toward a possible career in music.

“I have no doubt that some of these kids are going to go on to do amazing things,” Sewell said. “We’ve got so many remarkable young people it makes me so incredibly proud. Maybe someday they’ll win Junos.”
Junos London Girls Rock Camp Music Savanah Sewell The Reklaws