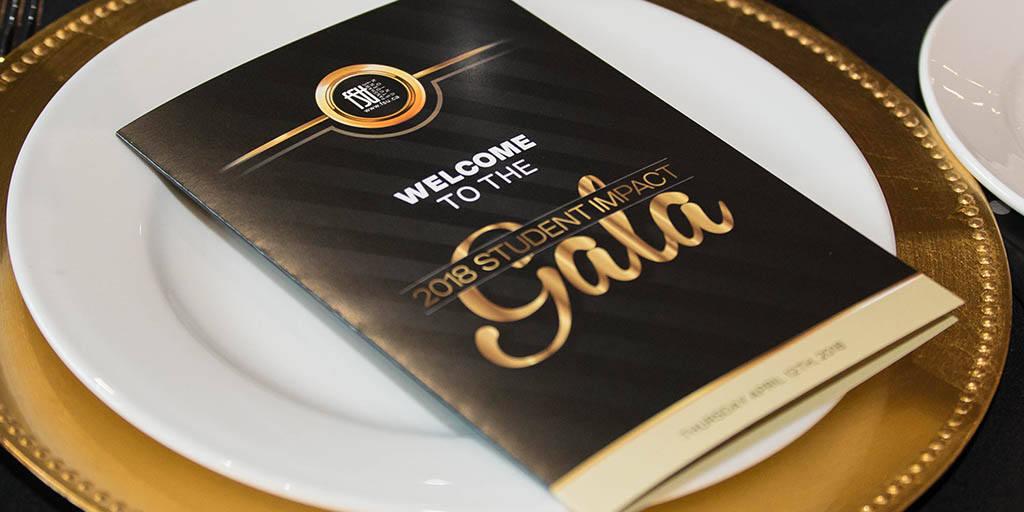 On April 12, the Fanshawe Student Union (FSU) held its first annual Student Impact Gala in the Oasis. Volunteers of the FSU were honoured for their dedication and hard work contributed over the past school year.

The evening began at 6 p.m. with cocktails and hors d’oeuvres being served to the guests in attendance. Guests received silver FSU pins as they signed in.

Afterwards, guests were formally welcomed by Tyler Hetherington, FSU’s events and activities co-ordinator, as well as the Master of Ceremonies for the night. Fanshawe’s Student Life Co-ordinator Kate Morris and Finance Co-ordinator Lisa Elliott, then presented a video showcasing the year in review in terms of events held and volunteer contribution.

While dinner and dessert were served, musician Jordan MacDonald of Texas King performed a variety of songs. Dinner was followed immediately by the award portion of the evening.

Six awards were given to outstanding student volunteers who went above and beyond in their volunteer role.

Patryk Tobiasz won the Sharing Shop Volunteer of the Year award, which is given to the most dedicated volunteer of the sharing shop, an on-campus service which provides the necessities of life to students in need. Amy Romao, FSU Administrative Support Services, presented the award to Tobiasz.

“[The FSU] just really makes Fanshawe feel more like home to me,” Tobiasz said. “For the first few months of school, I was just coming here and leaving. Then I got involved at FSU and I gained a lot of friends through the people that worked here and it just made me so much more comfortable here. I would spend all of my days here, I enjoy it a lot.”

Karly Carcamo was awarded the Volunteer of the Year award, which is given to an outstanding volunteer in recognition of their contributions to the FSU. The award was presented by Advocacy and Communications Co-ordinator Jahmoyia Smith

“It makes me feel like I’m part of a community,” Carcamo remarked. “Everybody is so gentle and polite and tries to help everybody. They say we are a part of a family and I think that’s true.”

The Rotaract Club, a club devoted to creating positive change in the community through volunteering, won the Club of the Year award. Rotaract’s president Danielle Jackson accepted the award on the club’s behalf. The award was presented by Administrative Co-ordinator Bonnie Williams.

When asked how the FSU has had an impact on Jackson, she claims that it helped her get to know the school better and that getting involved has benefitted her greatly: “This is my third year at this school and this is my first time getting involved so it’s really awesome to get involved now.”

Madelyn Allen, a current FSU director, won director of the year. This award is given to the director who has gone above and beyond in their role to help better the FSU. The award was presented to Allen by FSU Business Manager, Paul Masse.

“It’s a really good team. Anything that I needed, any resources, any questions I needed answered, they were always right there, willing and ready for it,” Allen illustrated. “It’s very inspirational, I’m going to miss them a lot.”

The President’s award was presented by FSU president Morganna Sampson. It is given to the FSU co-ordinator who has done an exceptional job in their role and enhanced student life on campus. Jahmoyia Smith, the Advocacy and Communications Co-ordinator, took home the award.

“[The FSU] has helped shape me socially and academically,” Smith explained. “It has helped me to become a well-rounded student.”

“[The FSU] has made me feel more useful,” Rudell said. “Rather than just sitting in libraries and labs doing homework. It’s helped my marks improve.”