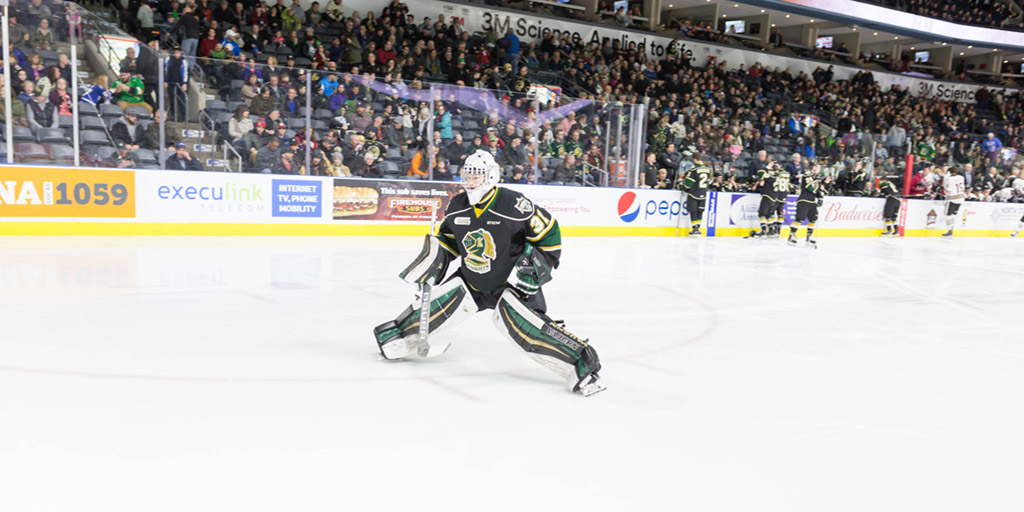 CREDIT: ANDREW STEPHENSON OF SHAKE MEDIA AND THE LONDON KNIGHTS
Since beating the Niagara Ice Dogs in overtime on Jan. 19, the Knights have lost four of their last five games.

There was a short period of time where the London Knights were thriving after the trade deadline.

Even without Cliff Pu, Max Jones, Sam Miletic and Robert Thomas, the Knights managed to win three games in a row from Jan. 14 to 19.

They outshot their opponents 10-5 in that span, but things have gone downhill, in all senses of the word, in the aftermath of that streak.

Since beating the Niagara Ice Dogs in overtime on Jan. 19, the Knights have lost four of their last five games.

And four of those games have been in their own building.

The longest homestand of the season didn't feel much like home for the Knights.

Following a tough overtime loss to the Kitchener Rangers on Jan. 23, the Knights remained at Budweiser Gardens for a date with the Owen Sound Attack on Jan. 26.

Cue one of the only bright spots for the Knights in the past two weeks.

Despite being outshot 42-24, they managed to put up a touchdown, beating their opponents 7-4.

Like usual, it was the veterans who led the way. Alex Formenton scored a hat trick and an assist to boot, while Evan Bouchard continued his excellent season, adding four assists.

But that was the last time the Knights would taste the win column.

Bouchard again led the way with a goal and an assist, but it wasn't enough.

But maybe the most anticipated matchup of the homestand was the last one.

On Friday, Feb. 2, the Knights welcomed projected top-three NHL pick Andrei Svechnikov and the Barrie Colts to Bud Gardens for the one and only time.

And they learned the hard way that they're no longer one of the league's best teams.

Barrie dominated from start to finish, doubling up the Knights 8-4, while outshooting them 36-21.

Svechnikov finished with a goal and an assist, earning him first star distinctions.

The only bright spot in the game was, you guessed it, Even Bouchard. He scored another two goals and an assist to keep up his torrid pace.

A 5-1 loss to the powerhouse Sarnia Sting the following day just added insult to injury for the Knights.

But despite how badly London is playing right now, it's ridiculous how well Evan Bouchard is playing.

The Knights may have lost four of the last five, but Bouchard has three goals and eleven points in that span.

Now up to 63 points, he is tied for eighth place in OHL scoring, and first among defensemen.

He's well beyond a point-pergame, with only 49 contests under his belt.

Unfortunately, not even Bouchard's play can turn this team around right now. They need to get back on track, and fast.

The eighth place Windsor Spitfires are just six points back; if fourth place London can't get firmly back in the win column, they could play the 43-5-3 Sault Ste. Marie Greyhounds in the first round.

London needs to right the ship, and start playing the hockey Knights fans are used to seeing.

But more importantly, they need to start preparing for what is inevitably going to be an extremely difficult first round matchup.

Super Bowl Sunday and CTE: Defining features of the NFL

Super Bowl Sunday and CTE: Defining features of the NFL