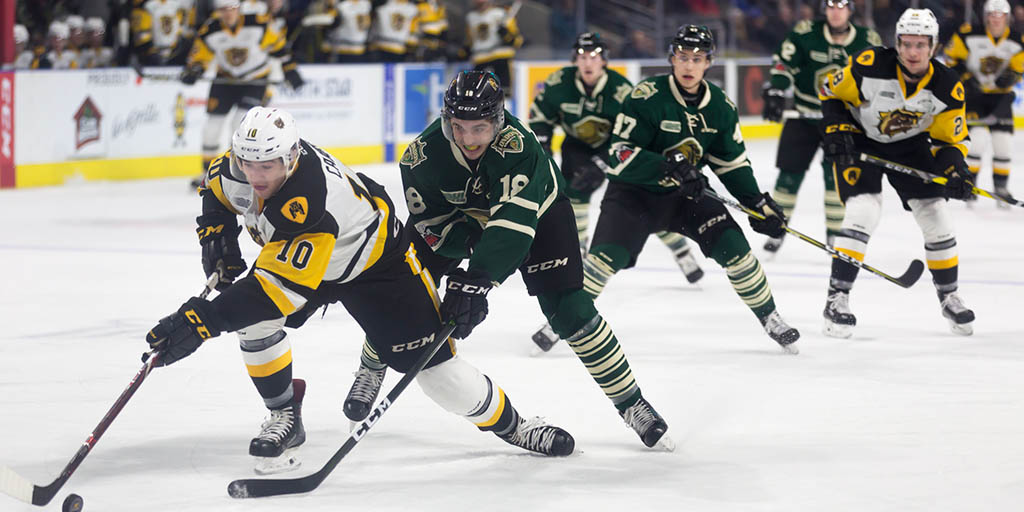 CREDIT: ANDREW STEPHENSON OF SHAKE MEDIA AND THE LONDON KNIGHTS
Players that have been part of the winning identity of the Knights over the past few seasons have been traded away as the team restocks for the future.

It’s generally known around the Ontario Hockey League (OHL) that each season can be split into two parts.

The first few months before the trade deadline, and everything that happens after.

Last year, the London Knights used the deadline as an opportunity to load up, picking up the likes of Mitchell Stephens, Dante Salituro and Mitchell Vande Sompel.

Although they fell short of the goal of winning another OHL Championship, falling to the eventual champ Erie Otters in seven games, the Knights were a much better team from before to after deadline day.

The same can’t be said about this year.

This time around, the London Knights cleaned house.

Players that have been part of the winning identity of the Knights over the past few seasons are now a thing of the past.

Cliff Pu, the speedy forward who earned the hearts of fans across the Forest City, is now a Kingston Frontenacs player.

Max Jones, who was known for his feisty play at all ends of the rink, joins Pu in Kingston.

Robert Thomas, who just won gold with Team Canada at the World Junior Hockey Championship (WJC), is a Hamilton Bulldog.

And the guy who just couldn’t stop scoring for London, Sam Militec is off to Niagara.

In return, the Knights received Sergey Popov and Nathan Dunkley from Kingston and Connor McMichael from Hamilton.

As well, they stocked up the future cupboard, earning a staggering 13 draft-picks.

Although the Knights had a brutal start to the season, they have played great hockey since and potentially could have made a deep playoff run.

Instead, and in the spirit that by next year, all four of their traded players could be playing in a National Hockey League (NHL) system, the Knights’ Hunter family focused on the future.

It’s just hard to believe that the Knights could beat some of the league’s top teams in a seven-game series, after some great organizations got even better at the deadline.

The Sault. Ste. Marie Greyhounds strung together 23 straight wins this season, and have an unbelievable record of 37-3-3. They became ridiculously good on deadline day, acquiring Taylor Raddysh and Jordan Sambrook from Erie.

In the East, both the Frontenacs and Bulldogs have loaded up for a deep run.

Besides Pu and Jones, Kingston scooped proven talents Sean Day and Gabriel Vilardi from Windsor, making them a force at all ends of the rink.

And the Hamilton Bulldogs, who are already first place in the Eastern Conference, got even better.

The pickup of Robert Thomas cannot be understated; he’s playing some of the best hockey of his OHL career. But the Bulldogs also acquired talented defenseman Riley Stillman from Oshawa, as well as Nicolas Mattinen from Flint.

Without Pu, Jones, Thomas and Militec, this London Knights team takes on an entirely new identity.

They still have some great young pieces, and will only get better with the plethora of draft picks they now own.

They sit in fourth place in the Western Conference, and the way this team is coached, anything can happen.

As it stands right now, the Knights are no longer one of the teams to be afraid of in the OHL.

And this is probably the first time in a long time that can be said.

Eventually, every team has to pass the torch. The Erie Otters won it all last year and this season, they’ve won just 13 games.

Seeing how good some teams have become, it was probably a smart move that the Knights traded away their best players for draft picks.

There will be a time again, when the Knights are as feared as they have been over the past few seasons.

Right now, there are just too many good teams.

For now, it’s best to enjoy this London team for what it is and know that even if they aren’t great, they’ll continue to be a team no one wants to play in the first round.