Student satisfaction and engagement survey back on campus 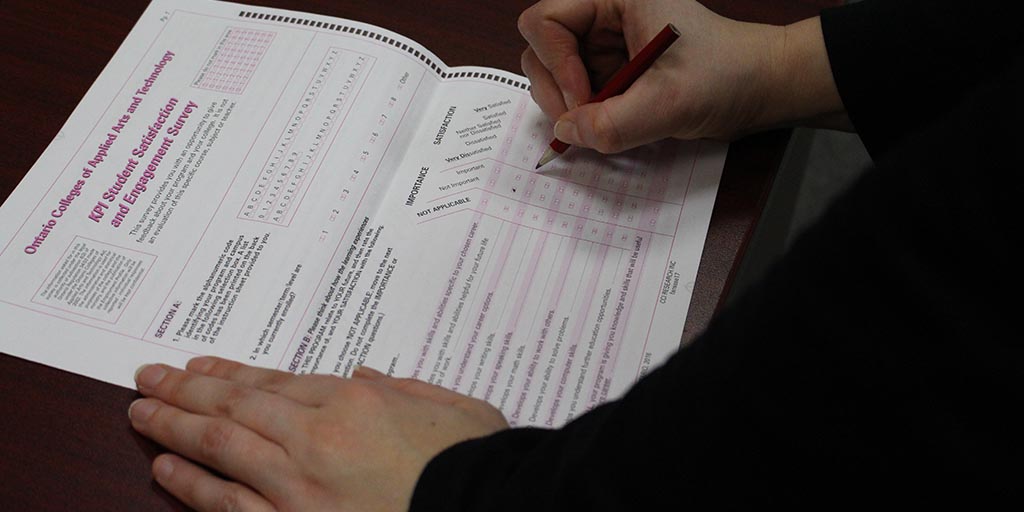 CREDIT: MELISSA NOVACASKA
The key performance indicator (KPI) survey, a ministry mandated questionnaire, is back in Fanshawe classrooms from Feb. 6-10.

Another round of the key performance indicator (KPI) student satisfaction and engagement survey is set to happen at Fanshawe from Feb. 6 to 10, according to Christine Spicer, reporting co-ordinator of institutional research for the college.

According to Spicer, the anonymous, provincial-wide survey is mandated by the ministry and is administered by volunteers who go to each classroom where students fill out the survey.

“It measures student’s satisfaction with their overall program, learning experiences, the services and facilities at Fanshawe,” Spicer said.

According to Spicer, the college’s approach and message is simple. “’How are we doing? When asked, tell us what you think. We’re listening.’”

Students in level 2 courses and beyond in their academic programs will be able to take the formal survey, which happens each year, usually the first full week of February.

The survey, which has been around since the late ‘90s, is also administered in the summer and fall for any students who are not taking classes in February for one reason or not, Spicer said.

“Our big focus is on the February survey because we’re surveying thousands and thousands of students at that time,” Spicer said.

The survey is a wide approach survey that lets students express their overall experience at the college, which is different from the student feedback survey (SFS), which focuses on each individual class.

Another difference is that the SFS moved to an online version, while KPI has remained a paper survey that requires students to physically fill out the questionnaire while in class.

According to Spicer, the KPI survey results are broken down into different program levels.

“What it lets Fanshawe know is how programs are doing, what they could improve on, what the students are asking them to improve on, it also lets them know how our services and facilities are doing here at the college and how each service and facility is used and how important students feel it is and how satisfied they are with some of those facilities,” Spicer said.

The response rate for the survey has maintained around the 84 per cent mark, which is great for the college, Spicer said.

According to Spicer, the fact that the survey is an in-class exercise with face-to-face interaction and has someone physically in the room to promote the questionnaire, students are more inclined to complete it.

“I don’t foresee it going online any time soon, that would be a decision that would be made at the ministry level, but right now it’s a paper-based survey because the response rate is so great with going into class, they won’t want to change that,” Spicer said.

The survey generally has similar questions each year, sometimes slightly changing the phrasing of some questions every once in a while including a student engagement section, Spicer said.

The reason for this is to allow the college to be able to see results of similar questions year to year, including any trends and consistency in responses.

According to Spicer, colleges across the province can also compare one another with the results as well, but that one of the best things about the survey is the commitment to the survey administration, and the engagement of the faculty and staff promoting the survey.

Fanshawe Student Union (FSU) president Carlie Forsythe said that although the KPI survey often gets confused with the SFS survey, it is a useful questionnaire to have on campus.

After online SFS results came in, Forsythe likes the idea of KPIs going into each classroom and mandating that each student in the classroom fills the survey out.

“We find really low numbers in SFS, we had maybe if you compare apples to apples, about one per cent higher overall since last year. So that being said, I think keeping [surveys] paper-based and the way we have [KPI] going now, it’s not broken, [so] don’t [try to] fix it.” Forsythe said.
Fanshawe College Fanshawe students KPI Survey

Crime prevention tip of the week