Students pleased with the "You Don't Say" campaign 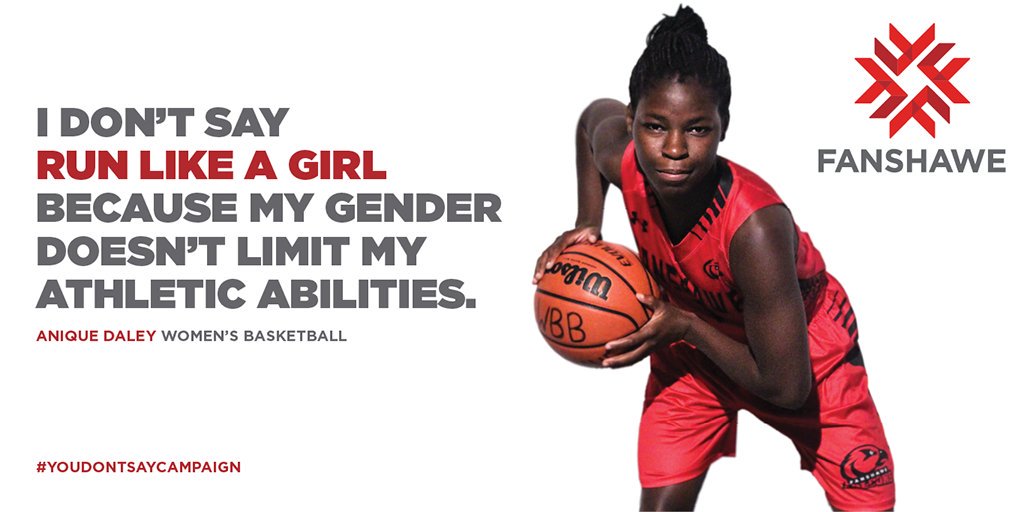 CREDIT: PHOTOS BY KERRA SEAY AND SIMON DUNFORD; DESIGNED BY SIMON DUNFORD
Student leaders stand up and let fellow students know what they don't say in a campaign to try and change the negative discourse happening on campus.

Fanshawe’s “You Don’t Say” campaign is receiving positive feedback from students. Since October 2016, posters of student leaders have been displayed across the campus, with captions explaining why they don’t say certain expressions such as “That’s so gay”, “Run like a girl” and “They asked for it”.

First year fine art foundation student Rachel Heide supports the campaign because it makes “people aware of what other people may find offensive.”

Amanda Way, a second year business- finance student, said she didn’t know about the campaign until asked about it, but said the message behind it is important.

“Everyone’s perspective and what they’ve been through is all different, so you have to be aware of how it might affect them,” Way said.

“It’s very good because you walk around the hallways and you hear everyone saying all sorts of things, not really thinking about if it could actually offend someone, which a lot of the time, it really could.”

Leah Marshall, the sexual violence prevention advisor, said there would be a second edition of the “You Don’t Say” campaign for the winter semester, following the positive response from the fall semester. She said students came up to her during an awareness initiative at the Halloween pub and told her it was “the first time they had seen a campaign so directly take on some of the language”. She also said that the directness of the campaign and student involvement appealed to students.

Marshall explained that Fanshawe’s “You Don’t Say” campaign stemmed from the campaign of the same name at Duke University, located in Durham, North Carolina, where student athletes participated.

She and Jennifer Gillespie, the campus life facilitator at Fanshawe, contacted Duke for permission to replicate the campaign and tailor it towards the students at Fanshawe. The Fanshawe Student Union (FSU) executives, FanshaweOnline (FOL) advisors, residence advisors, athletes and representatives from the First Nations Centre are all involved.

Carlie Forsythe, the FSU president said that the participating student leaders, such as herself, picked messages that they “personally believe in” before having their photo taken for the posters.

She added that the campaign was featured in a MacLean’s magazine article about Fanshawe’s sexual violence prevention and awareness initiatives. She added that people from other colleges, such as St. Clair College told her that they liked the idea.

“It got shared quite a bit, which is actually pretty cool,” she said.

Falcons women’s basketball player Anique Daley is in her first year of the personal support worker (PSW) program and her fourth year at the college. She can be seen on some posters, and said she’s received positive feedback for participating.

“My friends have come up to me and say to me, ‘Hi. I saw your poster. It’s a good campaign you guys have going on’,” she said.

Beyond the posters: Why it’s important to remember the campaign’s message

Marshall said the campaign’s message will help create a safer environment for all students.

Forsythe added that keeping the message in mind will help reduce stigma, including “certain areas of sexual violence, such as sexual violence against men”.

She added that students can live by the message by talking about it and educating themselves on why it’s important to watch what you say.

“That goes with anything in this world,” Forsythe said. “If you don’t understand something, don’t be afraid of it. Just educate yourself.”

“I’m reminded of a story where some classmates of mine used the term ‘that’s so gay’ the one time, and I didn’t say anything about it because I didn’t want to be ‘that guy’ or the ‘social justice warrior’ and today I keep thinking, ‘Oh, I should have said something! What if they are still using that phrase?’” he said.

“I would say that this campaign taught me to call myself out when I do or say something that might be considered offensive, but it also made me feel more confident to tell others too, so for me it became ‘I don’t say... and I don’t think you should either.’”
Fanshawe College Fanshawe students Gender