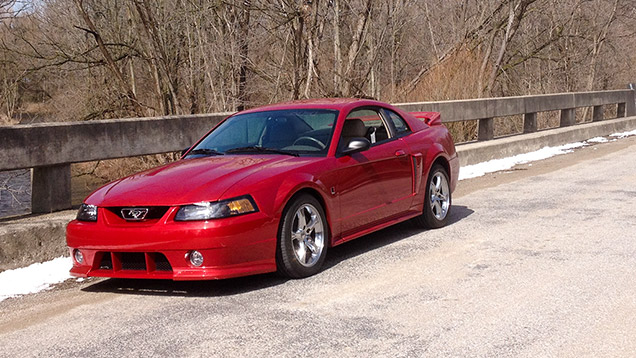 Time for something a little out of the ordinary. Rather than the usual new car review, this week's feature is on a used car - but it is quite a special one.

To the average person, the car pictured here looks like the later iteration of the fourth-gen Ford Mustang. For the real petrol heads, its specialties shout from miles away.

This is no ordinary pony car, it is a limited edition Roush Mustang. This is a special car; it is a 2002 Roush Mustang Stage 3 supercharged, and it is one of just 44 cars made in this exact spec. The spec is really amusing; designers used the old Mustang GT's 4.6 litre V8 as a base. It was a supercharged mustang, which raised its power output to 360 horsepower. The Roush Stage 3 Supercharged also developed 375 pound per foot of torque.

The added go power is not the main thing however, it is the all around improvements that help make a bigger difference. It really is as if Roush sent the Mustang to finishing school, and the end result is a car that is far more polished than the Blue Oval original ever was.

The polishing begins with the looks. Roush adds their own front bumper (and in many cases, a unique rear bumper and side skirting, as well), a special rear spoiler, unique rims which play host to 13- inch drilled rotors with four-piston calipers from Alcon. The list of improvements are not done with yet. Roush also gave the car their Stage 3 suspension package, so the car has none of the wobbliness at speed that is the biggest flaw in a regular Ford Mustang.

To further improve the driving experience, the manual versions got a lighter aluminum flywheel, plus a short throw shifter for the five-speed manual gearbox. These last two things really transform this car because this Roush was easy to launch. This car is worth its asking price for the gearbox alone, it's that good.

Not all is good, however. This Roush Mustang still suffers from some of the factory Ford Mustang's shortcomings, such as a slightly odd driving position and a seat that isn't exactly supportive. The dashboard and inner door panels are all the same as any other Mustang of this era, which means it is made from the same plastics that your microwave containers are made from.

However, if it's the glittery things that matter to you, than this car is not for you. If, however, you're looking for a car that is quite unique, and also entertaining, then keep reading.

Going through the first series of sweeping corners, and I could sense that this Roush is nicely tuned; in fact, it handles so well, you'd think it has an independent rear suspension set up, although it still has a live axle. There is a reassuring fluidity in its road manners, which eggs you on to go faster.

However, to be honest, tight back roads were not this car's preferred playground; its light steering and tail happy demeanor made it quite a handful on country roads. Out on the highway, it really shined, where it felt composed at speed.

Piling on speed is quite easy. Just tap into the power reserve and the supercharged motor hurls you forward onto illegal speeds. The sprint from zero to 100 kilometres per hour is over in just 4.4 seconds, and if you have the space to go flat out (not on Canadian roads, please) then the special white-faced Roush speedometer will indicate 264 kilometres per hour. Not the fastest car on the planet, but more than fast enough for road use.

When being pushed, you also get to enjoy the music made by the mechanicals. You hear the supercharger whining over the growling exhaust, which is what you'd want from this kind of car. The best thing is the noise is never irritating, and when you're just cruising, it quietens down to a comfortable hum.

Just as I was getting comfortable, it was sadly time to return the beast. If you want to check it out, it is currently on sale at Peninsula Imports, and they are asking $39,995 for this Torch Red example, which has covered just 6,000 kilometres since new. For that money, you can buy the latest 2016 Ford Mustang GT, which has more features, and even more power, but those are a dime a dozen. There were only 44 examples of this Roush Stage 3 Mustang built in 2002, and this is quite possibly the only one in Canada. So, if you're looking for something that will stand out at car meets, this is the car for you.