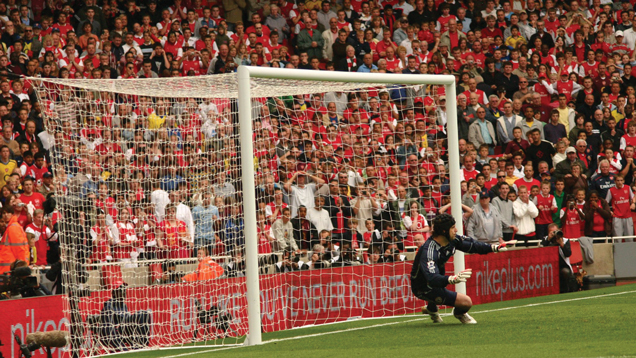 CREDIT: "PETR CECH" BY RONNIE MACDONALD ON FLICKR (CC BY 2.0)
Arsenal's shining star this season has been goaltender Petr Cech, creating a solid last line of defense, which has sparked an entire new confident type of play for Arsenal.

With 16 rounds left to play, the final half of the 2015–2016 Premier League season could be a definitive period of time for Arsenal Football Club. Written off at the beginning of the season due to a lack of transfer acquisition and not showing an on-field improvement, they have taken advantage of the unpredictable nature of the current season to sit on top of the pile, ahead of Leicester City on goal difference at the time of writing.

Having finished no lower than fourth place since the 1995–1996 season, Arsenal has been one of the most consistent clubs in Premier League history. Unfortunately for fans, the recent dominance of Manchester United and Chelsea have not seen the trophy return that such consistency usually rewards.

Over a decade in the Champion’s League has been equally fruitless, with a runners-up medal in 2006 the closest the club has been to winning the continent’s most coveted prize.

After the famous ‘Invincible’ season of 2003–2004, in which the club won the title while not losing a single match, a nine-year trophy drought stretched between FA Cup victories in 2005 and 2013.

They won the cup again last season, leading many to believe they could mount a serious title challenge with the right additions to the squad. The signing of veteran goalkeeper Petr Cech from Chelsea would be the only addition however, and as other teams around them brought in reinforcements, it looked as if Arsenal had missed their chance again.

Despite their rocky start, the club has found consistent form at the time when their rivals have slipped up, and their current hold on first place is largely down to key players finding form at the right time. Leading the team in goals is Olivier Giroud, who has 12 goals so far, including two in the 3-3 draw with Liverpool on Jan. 13, saving a crucial point for the club. Also key has been German international Mesut Ozil, who only has netted three this season, but leads the Premier League in assists with 16 so far.

Perhaps the most important player so far this year has been Cech. It has been a long time since Arsenal has had a solid, reliable goalkeeper as their last line of defense, arguably not since David Seaman who left in 2003.

The last decade or so has been filled with young, inexperienced or just plain not good enough goalkeepers, but Cech is a champion and a proven winner in the league.

It’s hard to know exactly how many points he has saved his new team, but there is a noticeable difference in the confidence level of the defensive line.

If Giroud, Ozil and Cech can keep their current form going for the remainder of the season, especially in the big games against their title rivals, Arsenal may have a better chance to end their decade long wait for a championship.