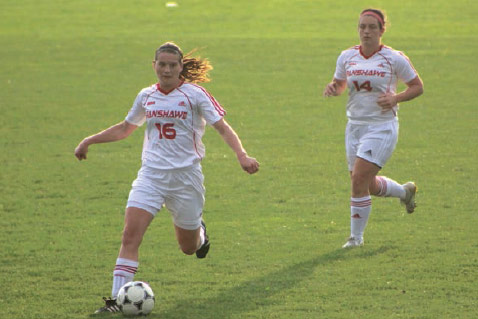 Falcons forward Katie Parker had a star performance in the win over Lambton scoring five goals in an 8-0 rout over the visiting Lions.

After the game Parker spoke about the growth and maturity the team has seen since the beginning of the season.

“From the start we were a very close group and after games like this one it just brings us even closer,” she said.

For the women’s soccer team to go deep in the OCAA playoffs, the right combination of skill, intensity and commitment to a strong work ethic will be required.

“I think what happens in practice, behind the scenes, with us being a tight-knit group and pushing each other in a positive way will be really important,” Parker said.

For her, the opportunity to play varsity is surreal.

“It means everything,” she said. “I can’t say that I go to school to play sports but college wouldn’t be near the experience it is without varsity.”

Most of us would agree: College sports offers students the unique chance to bond with each other outside the classroom and cheer for their fellow peers.

“When you bring 18 girls together who haven’t played together before, the main thing we stress is the one thing we can control on the field, our intensity.”

The Falcons’ intensity has been very apparent throughout their end of their regular season, which saw the team finish 5-1-2 to place third in its division.

The success of the women’s soccer team this season is a testament to the commitment that the varsity athletic department has towards advancing women’s soccer.

“First class” was the phrase used by Welsh.

“They (Fanshawe) have always treated us fantastically and this year’s been no different,” he said. “They’re always behind us and always supporting. It’s a great place to coach and a great place to play.”

The Fanshawe Falcons will look to support the women’s soccer team further as they head into the OCAA qualifying playoff round with an eye on the provincials scheduled for October 24 and 25 hosted by Algonquin College.

Dissecting MLS teams: Is it luck or is it skill?