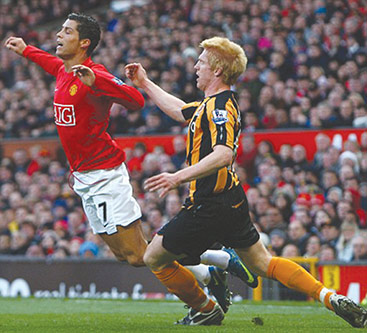 CREDIT: SOURCE
Infamous diver, Cristiano Ronaldo, has a rather impressive portfolio of dives and faking. On this ocassion against Arsenal during his Manchester United days is Ronaldo in fine form.

Throughout the year I have devoted plenty of column inches towards reflections on what it's like to be a soccer fan on this side of the Atlantic Ocean, I regularly find myself having to defend the sport in the face of the less knowledgeable, questioning how I can possibly enjoy a slow sport with very few bits of action in which players dramatically hurl themselves to the ground when they feel the lightest breeze.

Any attempt to explain what it is about the sport often falls on deaf ears, leaving many of my friends, and I'm sure I'm not the only one to have experienced this, under the impression that the overdramatic antics seen when someone is rolling around on the field is something that soccer fans are perfectly OK with.

Well I'm here to set the record straight, I cannot tell you one true fan of the game, regardless of club loyalty, nationality or who their favourite player is, who is genuinely entertained by soccer's special brand of overreacting, to assume so is silly. Athleticism, and the various subcultures that surround it, are breeding grounds for the uber-competitive, and that desire to win often manifests itself in dishonesty, regardless of the competition, and it should be no surprise that it takes different forms in different sports.

Now please don't take this as me attempting to rationalize diving, or “simulation” as it's more officially known in the rules of the game, as it annoys me just as much as it does those who are bringing it up, and probably even more so, because that dive could be brought against my team, leading the perpetrator to be labelled as “cheating scum” for the rest of the week.

However, the issue has become clouded among the bigger issue that has led to diving in the first place, soccer is an exceptionally hard sport to officiate, and the governing bodies behind the game are moving forward at a glacial pace when it comes to making the lives of referees any easier.

If you picture the NHL or the NFL, the “big two” leagues in North America, officials have one thing in common, the ability to stop play, head to the sidelines and take as long as they please to come to a final decision, often at the cost of the game's flow (unless it's the NFL, there is zero flow), and that is the biggest difference that a soccer referee must deal with, the total lack of help.

Sure they have a pair of assistant referees, but the positions that they must take up on the lines are rarely conducive to aiding the official in making a split second, difficult decision, was it a foul? Is it worthy of a card? If so what colour? The pressure on a ref can be immense, making it unsurprising that some players feel the need to make it obvious when they have been fouled, far too often they will stay on their feet in a fit of honesty only to be ignored by the referee.

Obviously among the players that truly have been fouled there are a few unsavoury incidents that made headlines over the years, but it is becoming a more significant priority within the soccer world, being added to the official rules of the game in 2002 as a yellow card offense. While the awarding of these cards has still been woefully inconsistent, the presence of the rule may set the stage for a new generation of more honest footballers. In the meantime though, stop telling us that we like diving, because odds are we hate it even more than you do.

Lightning Watch: Stormy with a chance of Lightning

From The Falcon's Beak